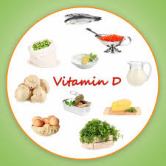 The study examined 14,498 people with multiple sclerosis and 24,091 healthy controls and used a Mendelian randomization technique to analyze the association between genetically reduced vitamin D levels, (measured by an existing levels of 25-hydroxyvitamin D, the clinical determinant of vitamin D status). The scientists determined that a genetic decrease in the vitamin D level by one standard deviation was associated with a 2-fold increased risk of multiple sclerosis and recommend- further clinical trials.

Previous studies have confirmed the link between the onset of multiple sclerosis (MS) and low levels ofvitamin D. The World Health Organization estimates that 2.5 million people are affected by multiple sclerosis. MS is a central nervous system disease characterised by problems with muscle control and strength, vision, balance, feeling, and thinking. The new study is one of the first to examine vitamin D levels from the onset of symptoms of their disease.

“Because low vitamin D levels are common and can be easily and safely increased by oral supplementation, these findings may contribute to better outcomes for many MS patients,” said lead author Alberto Ascherio, professor of epidemiology and nutrition at Harvard School of Public Health (HSPH).

“The benefits of vitamin D appeared to be additive to those of interferon beta-1b, a drug that is very effective in reducing MS activity. The findings of our study indicate that identifying and correcting vitamin Dinsufficiency should become part of the standard of care for newly diagnosed MS patients,” said Ascherio.

The study consisted of analyzing data obtained from 465 MS patients from 18 European countries, Israel, and Canada who enrolled in 2002 and 2003 in the BENEFIT (Betaseron in Newly Emerging Multiple Sclerosis for Initial Treatment) trial, which was aimed at comparing the effectiveness of early versus late interferon beta-1b in treating the disease. The researchers examined levels of vitamin D correlated with disease symptoms and progression over a period of five years.